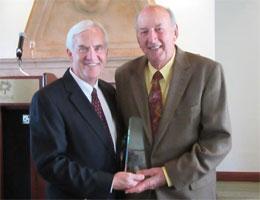 The Lifetime Achievement Award is awarded by CFFA’s mentors’ committee, which is comprised of the association’s five most recent board of directors chairmen who accept nominations from all past chairmen.

The award recognizes individuals who are industry oriented, have provided long-term consistent service to the California Fresh Fruit Association by serving on the board of directors or various committees for an extended period of time throughout their career and a person who, through their time and effort, has influenced CFFA and the industry in a positive way.

“We could not be more pleased that the mentors’ committee selected George Caratan for this recognition and award,” said CFFA President Barry Bedwell, who emceed the luncheon recognizing Caratan. “George exemplifies the type of long-term commitment and support that makes a segment such as fresh table grapes so successful, not only for himself but for all growers.”

As an active member with the California Fresh Fruit Association, Caratan served as chairman for the health benefits trust committee for over 20 years as well as the association’s standards and packaging committee.

The first recipient of the Lifetime Achievement Award was Sarkis Sarabian of Sarabian Farms, named in 2008, and the most recent recipient, in 2013, was Herbert Kaprielian, owner of Reedley-based CRJ Farming Co. LP.